Let’s be real, no one wants to touch poop.

Yes, cloth diapers are healthier for your baby, better for the environment, and cost way less than disposables, but for some, the threat of having to touch poop is a deal-breaker. Luckily, there are many cloth diaper accessories available to eliminate the chance you’ll stick your hand in it, including cloth diaper sprayers, finger mitts, and of course cloth diaper liners.

Cloth diaper liners are layers of material you add to your cloth diaper to make solid waste clean up easier. They are also a good way to protect your diapers from stains and from cloth diaper creams.

But before we get into what they can do, what types are available, and how to use them, we need to make it clear what exactly qualifies as a “cloth diaper liner” as sometimes these things can be mislabelled online.

Cloth diapering terms can get confusing, so it’s important to note right from the start that cloth diaper “liners” are different from cloth diaper “inserts.” Cloth diaper liners are thin pieces of fabric or mesh that are not meant to absorb any liquid. In fact, liners are meant to let liquid pass through them while holding more solid substances, like waste or ointments, on top.

In contrast, diaper inserts are meant to absorb and hold liquid in. Inserts are added to diapers to increase the diaper’s overall absorbency.

To put it another way, inserts, often made from bamboo, hemp, cotton, or microfiber, are the heart of a diaper, they are what makes it function. Liners on the other hand, which can be made from a single layer of fabric like fleece or a disposable mesh, are an extra layer that is only used to simplify clean-up or protect cloth diapers from damage.

As I just mentioned, there are two types of liners, disposable mesh ones, and fabric, reusable ones. Here’s a quick look at each type:

Reusable, or washable, cloth diaper liners are made from a single layer of fabric that can be washed many times without falling apart. Washable liners can be made from cotton, but the most common material is fleece.

Fleece is more popular for lines than cotton as it also wicks moisture away and maintains its dry feeling even when wet so it is like adding a “stay-dry” layer.

This moisture-wicking is more than just a nice feature; for babies who have a sensitivity to moisture against their delicate skin it can actually help prevent rashes.

Though most pocket diapers have a fleece lining built-in, many cloth diapering parents choose to still use an inexpensive fleece liner to protect their more expensive diapers from staining and to make cleaning up easier during diaper changes.

Fleece is also inexpensive and doesn’t fray when cut, which makes it a good choice if you plan to make cloth diaper liners yourself.

The environmentally friendly aspect of reusable diaper liners is up for a bit of debate. Though you aren’t throwing them away after every use, meaning you’re buying less, most fleece is made from synthetic polyester fibers, which can then break off and result in microplastics in the water system.

If you want to learn more about what type of fabric is best for washable liners, take a look at my post How To Make DIY Cloth Diaper Liners.

How Do You Make Diaper Liners?

If you’re shopping around for some reusable cloth diaper liners, you’ll realize it’s not easy to find some. In fact, I have created a list of options on this page several times, but brands seem to discontinue their fleece liners all the time.

Here’s what I know is available at the time of updating this post:

These hourglass-shaped soft microfleece diaper liners are not intended for absorbency but as a layer between your baby and the diaper that wicks away moisture from your baby's skin (giving them a "stay-dry" feeling) and makes cleaning up solids easier. 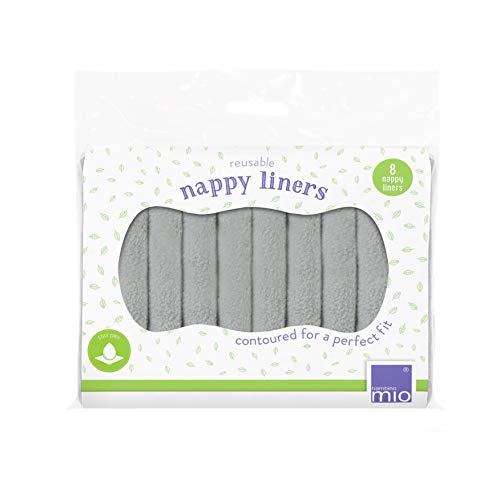 Buy Now
We earn a commission if you click this link and make a purchase at no additional cost to you.

Why are there what feels like 82 Million types and brands of cloth diaper inserts available for sale out there, and basically no liner products available? Simple, most cloth diaper users just make their own!

Once again I’ll direct you to my post How To Make DIY Cloth Diaper Liners for more information. In that post, I’ve put together everything you need to know about making DIY reusable diaper liners.

Disposable liners for cloth diapers are rectangles of thin fabric-like mesh that you place between the diaper and baby to catch the solid waste and act as a barrier to protect your diapers from diaper balms and creams.

Disposable cloth diaper liners are most often made from viscose, often rayon viscose, or bamboo viscose. Bumkins and OsoCozy are two of the more popular examples of viscose liners.

Rayon is another word for viscose, is a material made from wood pulp broken down into cellulose bits, polymerized, and then extruded into fine, smooth fibers. “Bamboo rayon,” or “bamboo viscose” then is this same process but with bamboo pulp.

A few disposable liners, like Wegreeco, are made from inego.

Inego fiber is made using a process similar to rayon, but using corn.

All bamboo viscose and inego disposable liners are biodegradable as they’re made from these natural fibers, even if the process to make them is a bit unnatural.

Of course, since bamboo viscose and inego liners are biodegradable, it should be no surprise that they don’t hold up well to reuse. Often these will find their way into the wash by accident, and they come out as a piece of fluff or string in most cases.

Can You Flush Biodegradable Diaper Liners?

Many disposable cloth diaper liners are sold as flushable and say so right on the packaging, but if you’re part of any online cloth diapering community, you’ve probably heard that they aren’t.

If you’re thinking, “I’ve flushed them lots of times,” let me be clear:  you can flush both wipes and liners and they won’t clog your toilet immediately, but being able to flush something does not mean you should.

Flushing wipes and liners will cost you, either with a septic system tank replacement, or higher municipal taxes because your city needs to do extra maintenance on clogged sewer systems. In 2013, CBC reported that just in Canada, flushables were costing Canadian ratepayers at least $250 million a year.

How Do You Dispose of Cloth Diaper Liners?

So if you can’t flush them, what the heck do you do with the liner during diaper changes? It’s best practice to dump any lumps of solids into the toilet and then to throw the disposable diaper liner (and any trace solids, it’s doesn’t have to be sparkling) into the trash.

This is actually how we are supposed to dispose of disposable diapers and baby wipes, though that’s not common knowledge.

Can You Use Baby Wipes as Diaper Liners?

Speaking of baby wipes, many times I’m asked if disposable baby wipes can be used as diaper liners. While it sounds like a good idea, it’s not.

Baby wipes are usually wet with a cleansing solution, though water wipes are now available as a gentler option. Wetness against a baby’s skin for a long period of time, especially with cleansing solutions, can quickly lead to rashes and even yeast growth.

In fact, in speaking with Dr. Lyndsey Garbi, the Chief Pediatrician of Blueberry Pediatrics for this article on cloth diaper rashes, she explained that moisture sitting on the skin and sensitivities to things like baby wipes are the top causes of diaper rash.

Can You Use Paper Towels as Diaper Liners?

Another substitute for disposable liners that I’m often asked about is paper towels. Paper towels are of course dry, cheaper than commercial diaper liners, and easy to dispose of.

Most paper towels aren’t a good choice for diaper liners because they are rough and don’t hold up with a lot of liquid (which they are made to absorb). That said, many cloth diaper users have luck using Viva brand paper towels as liners for their diapers. Viva seems to be a bit more on the soft side, the price is right, and they hold up ok.

Viva paper towels won’t hold up as well as commercial liners though and have been known to leave bits behind.

If you opt to try Viva paper towels as diaper liners, get the select-a-size type, or you’ll have to cut them in half to fit your diaper.

Viva paper towels should also not be flushed in the toilet as it will likely clog it. 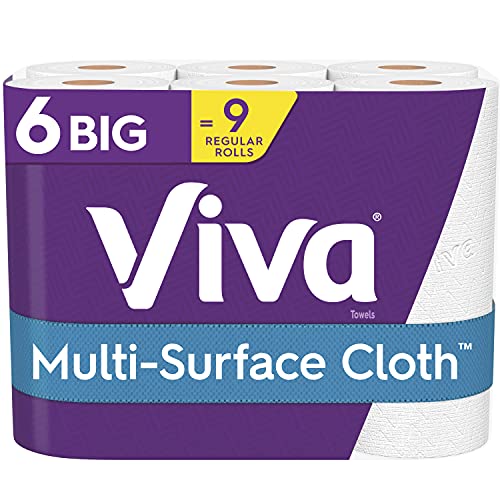 Buy Now
We earn a commission if you click this link and make a purchase at no additional cost to you.

Here are some of the benefits for both disposable and reusable liners for you to consider:

How Do you Use Cloth Diaper Liners?

When soiled, the used liner will either go into the trash if it’s disposable (see my note about flushing disposable liners above) or put in the wash with your diapers if it’s washable.

That’s pretty much it.

How Many Liners do You Put in a Cloth Diaper?

Whether you’re using reusable or disposable cloth diaper liners, you only need one per diaper change. Using more than one, especially of a reusalble fabric liner, may cause absorption issues. Cloth diapers need to absorb urine, and they need to absorb it quickly. Diaper liners are made to allow liquid to pass through them quickly, but with every layer you add, this slows the whole process down. Using just one liner will prevent leaks.

If your liner is bunching, or not holding up during removal, and making you feel like you need more than one for some reason you may want to try a different kind (resuable hold up best) or a different size/shape.

Other Methods to Remove the Poop Without Touching It

If you’re not sure about liners yet, you may want to have a look at some of the other ways you can get the poop off your cloth diapers easily and mess-free. Click here to see the list of ways to remove the poop.

https://youtu.be/ldaKHShoRxw Keep Scrolling For Written Review In this review, I'm going to talk about our experience with both the Rumparooz one-size pocket diaper and the Rumparooz OBV...

Continue Reading
link to How Do I Travel With Cloth Diapers? 7 Tips and Tricks

I'm April, the mom behind Cloth Diapers for Beginners and the author of the Cloth Diapers for Beginners Wash & Care Handbook. Aside from using cloth diapers on my own baby, I've spent a ton of time researching and helping other moms (and a few dads and grandparents) cloth diaper their babies. You might say, I'm a bit obsessed with diapers and all of the benefits they offer to parents, their bank accounts, and the environment.
Aside from being a cloth diaper lover, I'm also a writer and editor. You can find me and my other projects in most corners of the internet under the name thewriteDuffy.